Customizing the Humor by Joking About People. . . Nicely 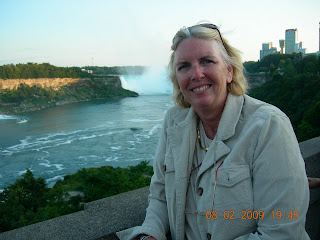 Here I am @ Niagra Falls. . .a break from my show for the Postmasters
(and i got to catch up with my friend Cherie whom I’ve known since Kindergarten!)
And now on to part 2 of using appropriate humor for convention and association conferences. The next rule of what is appropriate and/or topics to stay away from is, do not do mean-spirited comedy at the expense of others. In comedy clubs you are paid to be the funniest person in the room. Period. If a drunk heckler is sparing with you, you’d better win or you will not be booked back. Mean-spirited comedy is fine for that venue. Not so in corporate events. You need to be funny, but you need to know when to shut your mouth, lose the battle and move on.

You also need to know when to pass on a great joke if it’s going to hurt someone – even if most of the people don’t know it’s going to hurt someone. I did a show for a group who had 4400 people in the room and they ran out of meals for 1500 people. It was a plated dinner so I’m not sure how that happened – somebody needs a math class – but it happened. Now as a comedian, I want to get on stage, look behind the curtain and say, “hey, I found ‘em.” Don’t do that. Even though the people in the room would have laughed – most of them had eaten, some who didn’t get dinner had left, so the remaining hungry people were there to have fun. However, the meeting planner was in tears backstage. No one would have made the connection right away that this was slamming her, but I would’ve known. So I didn’t do it.

Now I do have fun with people, and I will get more into that when I discuss crafting the humor, but again, it’s stuff that the whole group has joked about openly. For example, I did a show once where one of the managers had just bought a new Porsche and everyone had been goofing with him about it. So I felt comfortable ribbing him a little. . .”so Bob, I understand you have a new Porsche. The rest of us are curious. Is that pronounced Porch-a . . .or . . . Middle-aged-crisis. It got a great laugh and no offense taken by Bob.

In preparation for my shows I’ll have a phone conversation with the committee, and it amazes me some of the things they think I should joke about. People have told me that so-and-so has big hair – make fun of it, or Tom is going through a divorce, it’s a riot. Well, it’s probably NOT a riot to them. My rule of thumb is, if the committee goofs about it to the person’s face, it’s probably (not always) okay, but if they probably don’t say it to the person’s face, then I shouldn’t either. I doubt people make big hair jokes to that VP.

In general, people who are in the limelight with the group (the association’s president or the staff member that’s been there a bazillion years) are usually (again, not always) fair game for some light-hearted fun. They are used to it, they enjoy the attention (I mean they ran for office didn’t they), and even sponsors like getting some extra credit for their product. I did a show once for a bean group. . .as in beans you eat. The VP’s of Bush Beans were there and I had some fun with their talking dog Duke. After the show, as I was walking across the parking lot, a big limo pulled up and the window rolled down. Inside was one of the VPs. He said “hey, you’re the comedian? You were great! Thanks for having fun with our product. That dog has made us a lot of money!”

So that’s the long and short of it. You can have fun with certain people, if you do it NICELY.