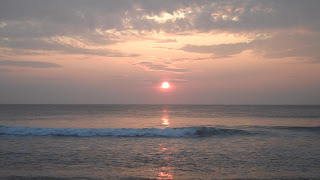 Sunrise on the Outer Banks, NC. . .I had a great week of vacation!
And in continuing my blog series on using appropriate humor, things to stay away from for business humor and convention groups would be obvious jokes. Not that they’re inappropriate but the group has probably heard them ad naseum (spelling please???) and so they won’t come off funny. In my earlier blog example about the blind merchants group, they had heard it all. If I’d come up with the best, most clever blind joke, it didn’t matter, because it still was not appropriate. With obvious jokes, you run the risk of turning your crowd off because they’re tired of those jokes. I did a show for the Postmasters, and believe me, I did NOT make any “going postal” jokes. That’s the first thing my friends brought up when they heard about the group, but I’m betting the postmasters were tired of them, not to mention some of those people may have had some firsthand experience with the employees who caused those postal jokes. It’s just not funny to them. So remember, the first, most obvious joke that pops in your head may be too obvious, and you might want to re-think using it.

ALSO, remember, what might be great for one group, might not work for another. I urge you to go through your material between each program and make sure the jokes are appropriate for that group. I have some product jokes and some jokes about certain businesses in my act. I don’t say them if I’m doing a Chamber of Commerce event because there is most likely someone there from that particular business. I also check the sponsors and make all of my jokes are appropriate for them. . including not promoting their competitor’s products.

And make sure you don’t bury product jokes midway into your program, and then forget about them. I did a show at a comedy club once, where I was joking about exercise and diet, and I said “everyone’s getting into fitness, even McDonald’s has a nutritionist. Isn’t that like wearing a seatbelt in a Geo Metro? What’s the point?” It got a HUGE laugh, and I thought to myself, well, that joke usually does well but wow! Later the club owner came up and said, boy, you have guts to do that McDonald’s joke in a room full of their CEOS. I FORGOT that it was a fundraiser for Ronald McDonald House. In my defense, I forgot because I wasn’t told about the group until I arrived (it was a comedy club, and Ronald McDonald House had bought out the room for a fundraiser that night), and the speakers ahead of me were doing these gut-wrenching stories about the kids at the house. My first 10 minutes of my act is on how I don’t want kids, so I was furiously editing those jokes out. I totally forgot about the joke buried 30 minutes into my act. It all turned out okay, but it could have gone very badly. That was a big lesson learned.

And finally, I would be wary of making too much fun of other states. There’s always the inclination for some comics to poke fun at Kentucky or Alabama and their education systems, for example. Both states have great education systems (I’ve worked for those groups), but comics seem to pick on them anyway. But remember, you may be considered for a show in those states and/or some of your audience may be originally from those states. So be conservative and don’t do it. Not to mention, that’s the mean-spirited humor that I warned you about in the beginning.

In summary, from my last few blogs about what is not appropriate humor and what subjects to stay away from, don’t:
Cuss
Do sex, religion, politics unless the client knows that that is what you do
Make jokes that are sensitive to the industry climate.
Do jokes at the expense of others that are mean-spirited – if you wouldn’t say it to the person’s face, it’s probably not appropriate.
Do jokes that aren’t appropriate for the group – such as product jokes or jokes about the sponsors
Do the obvious jokes; they’ve heard ‘em.
Make derogatory fun of states.

There are of course other subjects that you may want to avoid when addressing a business crowd, but these are some of the major ones that, in my opinion, you should avoid. Ironically, recently after giving a presentation on using appropriate humor, a guy in the group actually emailed me an anti-george bush joke AND told me how he was using some of my material around the water cooler at work. ..was that okay? – NO! Where was he during my talk?????