People You Can Goof With At the Meeting 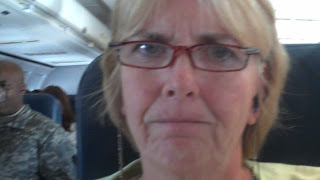 Okay, so I thought I was going to be be writing this joke writing blog from 30,000 feet up, but the “free” wireless on Delta didn’t cooperate. I Finally got online, but then the battery on my laptop died. . ahhhh. I did manage to get one email out to a couple people with a pic of me on the plane. .. exciting stuff!
I’m continuing my series of using appropriate humor. As I’ve mentioned, I do a lot of customized humor for groups. . .it’s a fun, fast way to connect right off the bat AND it makes my program more interesting to ME. I’ve heard my jokes, so it’s fun to come up with new ones.

So what else can you joke with. . .or should I say WHO can you joke with. Yes, you can have fun with people in the group, as long as it’s not mean spirited! I like to find out who I can joke with – someone the whole group knows, and what do we know about that person that most of the group knows (avid golfer, likes to crochet, etc. . ). Sometimes I have groups say things like “oh, yeah, make fun of her HUGE hair, or he’s getting divorced, it’s a riot!” Well, I’m sure it’s not a riot to him. My rule of thumb is that I don’t joke about anything that you wouldn’t say to that person’s face. I’m guessing the committee members don’t joke about her huge hair to her face or laugh about his divorce. . . so I won’t either.

With that said, the best people to joke with are the ones who are the most visible in the organization. Because generally:
They are used to it.
They kind of expect it.
They don’t mind being in the limelight.

Just make sure you find out something about that person that most of the group knows, so it’s not just a small, inside joke. And really dig deep. Saying Bob is a bad golfer doesn’t really give you much to go on. Saying Bob’s handicap is 89 and he’s broken 4 clubs by throwing them down the fairway, gives me something to work with. Also ask about known hobbies, family, events during their tenure, looks (in general, bald guys and/or tall guys are used to ribbing about it and it’ll USUALLY be fine.)

Other people/groups to goof with at conventions are the sponsors. Again, as long as you’re not mean and don’t bash their product, they usually like getting the extra attention. Face it, sometimes all they get for their money is a lousy banner and some non-professional emcee stumbling through a quick thank you or acknowledgement. I did a show for the Dry Bean Institute, and Bush Beans was a prominent sponsor. I had some fun joking about that talking dog Duke. Later that evening as I was crossing the parking lot, a huge limo pulls up and the window rolls down. . inside was a Bush Beans VP. I’m thinking I’m in trouble now. I said I hoped you liked the show, thanks for letting me goof around with you, etc. . .. He said “You were great. THANK YOU for mentioning us. That dog has made us a lot of money.” I was not mean about the dog and I didn’t say it was stupid. I think the joke was something about how that dog is in every commercial. And where are the other executives tonight. . oh, yeah, they’re outside, beating a theme to death. It was a hit with that executive anyway.

So go ahead and poke tasteful fun at people and sponsors. You can get some great lines.