3 Tips for Things to Control so Your Jokes (and speech!) HIT 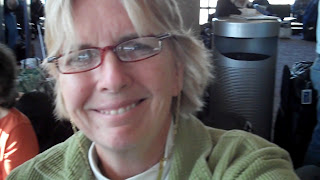 Here I am sitting in Phoenix Airport today! Flight is late coming in from San Jose. . I’m headed to a show in Oklahoma. Ain’t travel fun!

Okay, every once in a while, the jokes I write specifically for the group don’t hit. OWWW! Luckily I have so much faith in my act that I know I’ll usually get ‘em back if I jump into my standard jokes. BUT for those of you who are new to using jokes to kick off a presentation, it might freak you out. The good news is that there are many, many things you can pay attention to in advance, that will give your material a fighting chance. I’ve lived through A LOT of things that have worked against my material, so I’ve got a page of stuff on my show set-up sheet that will help the client in setting the stage correctly. I’ve included a couple here – feel free to contact me if you want the whole list.

Check the room layout. I know they’re going to have dancing after your speech, but they can’t have the dance floor between you and the audience. . . that makes the show/speech loose it’s intimacy. If need be, you may have to get on the dance floor and deliver from there. . . as long as everyone can see you, it will work, AND it’s beats having people lose interest and break off into focus groups. With that said, you also need to make sure the stage is on the long side of the room. It’s easier for you to look left and right than try to engage the people who are wayyyyyy in the back of a long room. If the room is too long, make sure you have imag screens up front AND ½ way through the room.

Triple check that they have the right intro. This isn’t so that you get all of your credits read, it’s because on several occasions they’ve read my bio. This is longer than my intro, and much more boring. The purpose of the bio is to give background to the client so they hire me and/or for people to decide to come to my session. If they’re already sitting in the room, then they don’t need all of that info. PLUS in my bio are some of my jokes. I’ve had people read my jokes before I go on. Sure they get the laugh. But then I don’t get the laugh when I say ‘em (and I’ve got lots of tag lines and callbacks so I HAVE to say some of my jokes – even if the emcee read ‘em).

And finally, remind the client (it’s in my set-up sheet) that the purpose of the person introducing you is to get the crowd quiet and focused, so that I don’t have to; I always tell them that they don’t want to pay for 10 minutes of my time to do what the emcee should be doing. Also, sometimes the people introducing you are trying to be funny with your intro, and that doesn’t work. Not only is their ad libbing usually bad, but it’s confusing to the people trying to figure out who is coming up. I just had a guy read my intro and when he got to the part about how I wanted to be a comedian since I was 12, but my parents wouldn’t let me, he ad-libbed that they tied me up and chained me to the house. That was ridiculous and people kind of stared at him and me. The emcee will probably get more laughs just reading the intro the way it’s written.

So there’s a couple of the big things to do to get off and running. Handle the easy stuff like this, and if the jokes are funny, they’ll laugh.