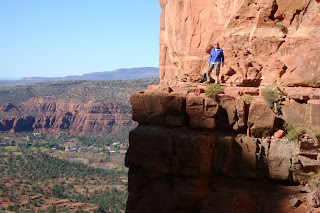 Here I am in one of my favorite places – Sedona, AZ. Away from all the current events!!!

Topical jokes – jokes about current events – are a great way to freshen up a standard speech and make it sound like you just wrote the whole speech today. I started out writing topical jokes for my comedy act, and in fact I thought I’d do ALL topical jokes, but they got out of date so fast (can’t still talk about Lorena Bobbitt!), that it was hard to keep up with. Now I just sprinkle them into my act to freshen things up. I started thinking about topical jokes because the first joke i ever sold to late night TV was about the Super Bowl. . .see below. . .

To get material for topical jokes, you can look at news sources on line and in print. Yes, in print. USA Today is written so that the set-ups are almost already there – all you need is a killer punch line. And check out whacky news sites or gossip-type sites like the Smoking Gun for some great topical ideas. The set-ups for almost all of my topical jokes are pretty much word for word from news stories. Once you get your news ideas, a quick way to make a joke is to examine “how” and “what”. For example, here’s my first late night TV joke. . .

• “CNN reports that this Super Bowl weekend lots of vendors will be selling counterfeit sports items that aren’t officially licensed by the NFL. An NFL spokesperson said that you can tell if the T-shirt is not an official NFL t-shirt. . .IF YOU CAN AFFORD IT!!!”

For this joke I looked at the words “counterfeit sports items” and gave some thought to how can you tell???

And the cool thing is, you CAN reuse some topical jokes . . .the super bowl will come around again and though one movie star goes into rehab, you can bet that another one will take their place at the bar. Also, if the news item isn’t too well-known, like some obscure fact, then people won’t realize you’re talking about a report that happened 2 years ago.

Here’s a couple of past topical favorites that i sold to various places that I can actually use again because they’re so obscure.

• According to Redbook magazine men really enjoy fixing stuff around the house. . . as long as it doesn’t involved the word “relationship”.
(what other things do guys fix and not fix)

• 5 guys survived a blizzard in Oregon by making a fire out of their credit cards and cash. It could have been worse. They could have totally wasted the money by going to see Blades of Glory (or some other silly movie).
(I looked at how else could you waste your money)

Start paying attention to the news to come up with some fresh material!